Winning the war on HIV

Research Impacts at Home and Abroad

He has authored more than 300 peer-reviewed papers, supervised 37 graduate students, and sits on editorial boards of eight scientific journals. Wood’s long list of accomplishments would be impressive for a senior academic, but having all these achievements under his belt by the “tender” age of 36 is why the BMJ Group – publisher of the prestigious British Medical Journal – conferred its 2010 Junior Doctor of the Year Award to Wood.

The international award, chosen from more than 100 nominees and given to a young physician who has “done the most to improve the world we live in,” tops the list of other early career honours already bestowed upon Wood by the Canadian Medical Association, the Canadian Institutes of Health Research, and the Canadian Association for HIV Research.

Wood is a clinical associate professor in the Faculty of Medicine’s Division of AIDS, chief medical resident in the Department of Medicine, and co-director of the Urban Health Research Initiative at the British Columbia Centre for Excellence in HIV/AIDS (BC-CfE). In his relatively short academic career, he has established himself as a leading authority on HIV prevention and treatment issues among drug-addicted populations.

Yet he still finds time to engage in public discourse, having commented in nearly 300 news stories and written almost 30 editorials in the past decade.

“The evidence to support harm reduction intervention is extremely clear,” says Wood. “The fact is that scientific evaluations of harm reduction have been systematically reviewed and unequivocally endorsed by the World Health Organization and all other international scientific consensus bodies that have considered these interventions. And I feel it’s part of my responsibility as a scientist to communicate that to the public.”

“For several decades we’ve been looking at drug addiction through moralistic and criminal justice lenses,” says Wood. “But there is now a mountain of evidence showing that drug law enforcement, including mandatory minimum sentences for drug offences, through a ‘war on drugs’ approach, simply doesn’t work.”

“As a parent myself, I’m concerned by the evidence that youth have easier access to marijuana than tobacco and alcohol. If the stated goal of law enforcement is to decrease supply, it obviously hasn’t succeeded,” Wood says.

Instead, Wood believes that tackling drug addiction through prioritizing prevention and treatment will reduce demand for illicit drugs while treating people with dignity and respect.
It would also make economic sense, especially for a country with a publicly funded healthcare system, he says.

“HIV outbreaks commonly occur in prison and transmission has been directly linked to policies that prioritize law enforcement over public health,” Wood says. “The taxpayer is the obvious loser, footing $250,000 in estimated medical expenses for every case of HIV infection.”

Embedded in the Community

Born and raised in Vancouver, he can’t imagine working anywhere else in the world, especially when one of the largest concentrations of expertise in HIV/AIDS is right here in his backyard.

“UBC and the BC-CfE have one of the most well-regarded research clusters in the world when it comes to HIV/AIDS research and how we address issues that surround and impact infection and survival rates,” says Wood.

As for his mounting accolades, Wood says they are recognition of his teams at BC-CfE, St. Paul’s Hospital and UBC.

“It’s flattering and humbling, but none of it would be possible without my colleagues, the participants in our research, who give willingly of their time and experiences, and the fantastic team of graduate students who are so passionate and hardworking,” says Wood.

“We’re fighting such an uphill battle here, the more people we can get working in this area the more quickly we can turn this Titanic around.” 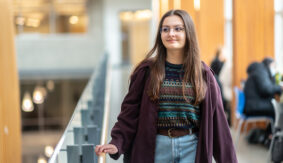