Inside UBC experiences: Travel and research

From New Zealand to Spain to the local community. 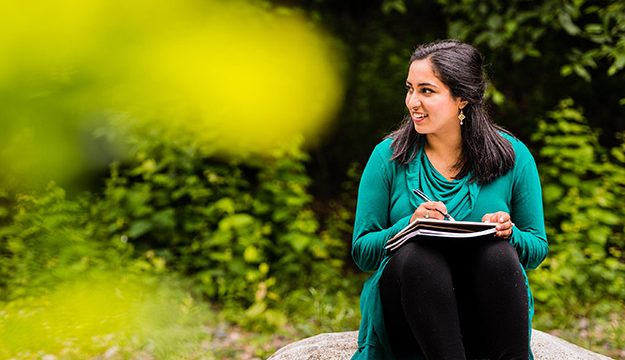 After being accepted into three other Canadian universities, Burnaby, BC native Emmy Chahal chose UBC’s Okanagan campus. “Because of its smaller size, beautiful location, world-class reputation, and friendly recruitment department,” she says. After touring the campus, she left feeling inspired, and the genuine nature of its staff and students made a significant impression on her.

Now a fifth-year student, Emmy is wrapping up her Bachelor of Arts degree, with plans to work in local communities as an educator, doing mental health advocacy, or in the health and wellness field. “Initially I was planning to major in International Relations, but after a trip to New Zealand with Go Global, I switched to Cultural Studies,” she says. “Cultural Studies is all about questioning why things are the way they are and examining systems of power. I realize now that nothing is neutral and everything is embedded in the social fabric within which it exists.”

Emmy reflects on her time at UBC and shares two of her favourite and most formative experiences – studying abroad with Go Global, and completing directed-studies projects.

Tell us about your directed-studies research projects.

I worked on two directed studies. One was about global social justice education, with Dr. David Jefferess and the Central Okanagan Teachers’ Association. Over the course of approximately six months, I developed a gender-based workshop for Grade 5 students in the Okanagan. I based the workshop on research in the field of gender education and social justice pedagogy.

In February of 2015 I presented the workshop to over 100 participants in the community. Community-based research initiatives are so important because they provide tangible outcomes within the places where we live, impacting a greater community than just academics.

Secondly, last Fall, I worked with Dr. Ilya Parkins on a directed study entitled “Embodied Pedagogies: Yoga in the University Classroom,” where I taught 15 minutes of yoga in each 80-minute class of Perspectives on Gendered Bodies.

This was a fascinating project and made clear links between learning and embodiment (being in our bodies). I am also a registered yoga instructor, and I felt honoured that Ilya presented the opportunity for me to teach yoga and mindfulness in her class. Ilya and I recently presented at a conference on learning about our findings.

Tell us about your experiences with the Go Global study abroad program.

I participated in two study abroad trips. One to New Zealand for six months, and the other to Spain for one month over the summer. They were both incredibly eye opening and life changing.

In New Zealand I took an Ethnicity and History course about indigenous histories and people in Oceania, and it inspired an interest in studying Cultural Studies. I also took an outdoor education class that fostered a reverence for nature, and in my spare time did lots of hiking, skydiving, swimming with dolphins in the wild, and more. New Zealand is a beautiful country with spectacular landscapes.

In Spain I learned Spanish, which was a humbling and beautiful experience, too. I fell in love with Santiago de Compostela and hope to walk the Camino some day in the future. I even got a tattoo in Spain, the word fluir, which means “to flow.” To me, this represents the feeling of flow that I had while living in Spain.

What has your UBC experience helped you achieve so far, and how?

I believe that my degree has made me a more critical thinker and a better, more well-rounded, and compassionate person. For that, I am immensely thankful.