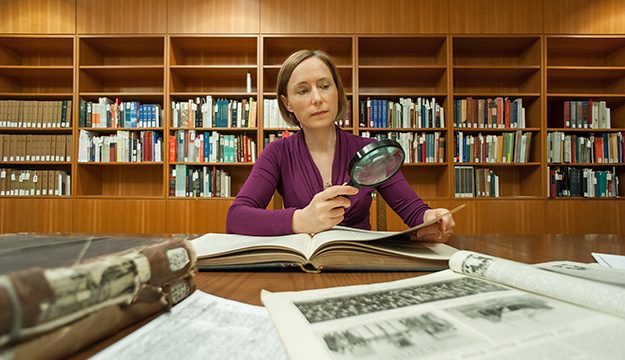 Dr. Chapman’s search began by tracking down original copies of Eaton’s known works, which led her to other Eaton writings that had eluded scholars for years. Travelling across North America, Dr. Chapman scoured libraries and archives collecting these volumes, which had largely gone unnoticed due to Eaton’s use of pseudonyms.

As a mixed-race female author at the turn of the 19th Century, Eaton’s works provide a rare and candid perspective on racial politics. Most of the children in her family experienced racial exclusion only rarely; born to a British father and a Chinese mother, Eaton was not seen as Chinese and her background was not recognized. Though her heritage provided her with opportunities that were inaccessible to Chinese-identified women, throughout her life she felt out of touch with a large part of her family’s history.

A writer and journalist for The Montreal Star, The Seattle Post-Intelligencer, The Los Angeles Express, and The Boston Globe, Eaton detailed the lives of the Chinese diaspora under the pseudonym Sui Sin Far, giving voice to their stories of familial separation and traumatic experiences of children being isolated from their Chinese parents and heritage.

“There are very few early Chinese perspectives,” said Dr. Chapman. “She doesn’t hold back from calling attention to particular people, legislators, political policies that are complete nonsense and hypocritical.”

While Eaton’s works primarily responded to a “Yellow Peril” discourse that promoted racist stereotypes of Chinese immigrants to North America, they continue to be relevant today.

“Many people living in North America today, especially in Vancouver, have Chinese ancestry. The experiences she talks about for early diasporic Chinese on [Canada’s] West Coast are stories that are shared by people in their families,” said Dr. Chapman.

Although Dr. Chapman’s research on Eaton’s recently-discovered writings is far from complete, she hopes to write a new autobiography of the Eaton family one day.

“I found some new details about their life in Montreal that suggests that her British father helped smuggle Chinese men into the U.S. during the Exclusion Era, the period when Chinese immigration was banned,” said Chapman. “Her mother was five years old when she left China, touring the U.S. and the world as a tightrope dancer in the early 1850s.”

“I feel like Edith Eaton’s formation as the child of these two fascinating people would be a great story to write.”