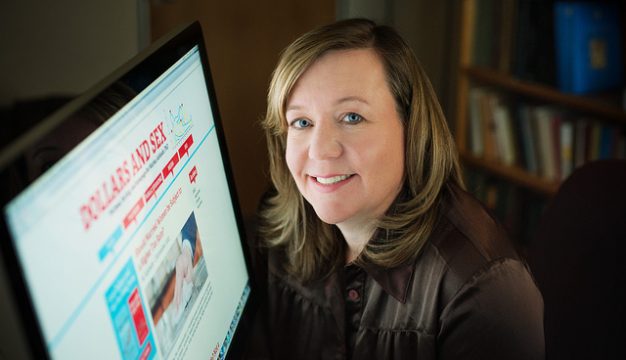 I have a confession to make. I have a Hollywood agent—or to be more precise, my research has a Hollywood agent. It’s surprising, I know.  As an economist, I don’t see myself sitting on a film set, shouting “No, no, no! Demand shifts to the left and supply shifts to the right!” But at least one person in Los Angeles thinks my work is “Hollywood gold.”

How could this research, originally intended for an academic audience, ever attract the interest of an agent?

In 2008, as the economy was crashing and taking the reputation of economics with it, I was thinking of new ways to teach students the tools of my trade in a way that convinced them that economic theory has real life applications beyond forecasting GDP growth rates.

I needed to encourage students to apply economic thinking to their personal lives. And so, with the help of hundreds of published academic papers, the economics of sex and love was born.

When this led to my blog (originally hosted on the university website and later picked up by an influential platform, Big Think) I was able to reach a much wider and more academically diversified audience. That exposure (and, I should say, the learning that goes along with researching and writing for a heavily trafficked blog) led to a book deal and, apparently, the need for a Hollywood agent.

It has been a long time since I thought about my work simply as a fun way to engage students in learning. Topics related to sex and love, such as the effects of free access to contraceptives, the increase in births to single women and the change in the way we think about marriage, have become an important part of the public discourse in recent years. Economists are among the academics who bring an important and at times quirky perspective to that conversation.

In 2008 UBC economist Marina Adshade started a popular new course called the Economics of Sex and Love. She is a blogger, media commentator and author of Dollars and Sex. You can find more about her work at marinaadshade.com.