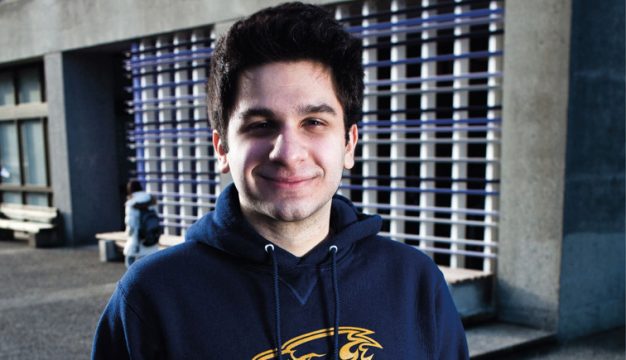 Altay Otun is not just an international student, he is a student with an amazing international outlook. During his first two years at UBC, he visited China, and North and South Korea to facilitate dialogues on how to achieve peace in the Korean peninsula. He also participated in internships in Northern Cyprus and Palestine, and he competed for UBC at the World Model United Nations in Singapore.

Choosing to come to UBC from Chicago was an important decision for Altay — one that helped shape his world view. “The students at UBC represent every corner of the globe and offer the campus their unique perspectives and insights,” says Altay. “Each of my friends is from a different country and I honestly learn something new about their cultures every day.”

“UBC has a global reputation of being one of the best universities. It also has the added benefit of being situated in one of the most beautiful cities in the world [Vancouver] and a campus that is second to none. It was not a difficult decision to come to a top-ranking university that challenged me academically while being able to enjoy everything that Vancouver has to offer.”

During his undergraduate degree, Altay interned at the Washington Institute for Near East Policy in Washington DC, where he conducted research on Turkish foreign policy for the Director of Turkish Research. He also edited the Director’s op-ed pieces for The New York Times, The New Republic, CNN, and The Washington Post. This experience honed his research skills and gave him an idea of what he wants to do after graduation.

“I hope to get my master’s degree in Middle Eastern Studies and work at a think-tank as a researcher. I am also considering a career in the Foreign Service at the U.S. State Department,” says Altay.

To other students considering coming to UBC, Altay has this advice: “I would encourage any student to select UBC because you will attend a top school, in a top city without breaking the bank. UBC offers a world class education at an affordable price.”