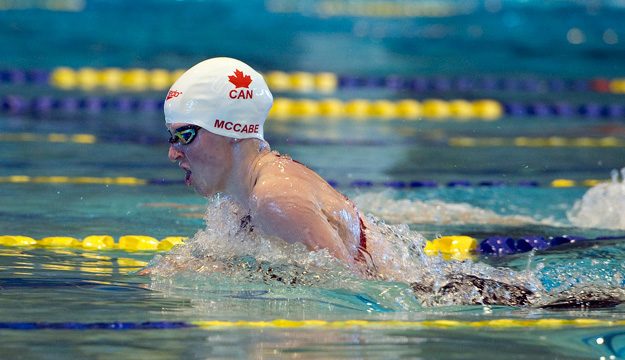 For UBC Olympian Martha McCabe, coming to UBC was a key decision in realizing her dream of swimming in the Olympics. “Not only does UBC offer a great education,” says Toronto-born Martha, “but the athletic-academic combination is definitely the best in Canada.”

With the National Swim Centre and breaststroke specialist coach Joszef Nagy working at the UBC Aquatic Centre, coming to UBC for school and swimming was my best option by far.”

“Once I moved out to UBC for school and swimming,” says Martha, “this dream became much more of a reality. In the summer of 2008 I became the second-fastest Canadian female 200-metre breaststroker of all time. At that point I realized it was time to take it all to the next level and compete with the world in this event.”

UBC prepared Martha in many ways for competing in the 2012 Summer Olympics in London. “Obviously my coach has prepared me through training to be physically and mentally tough. Also, my undergraduate experience at UBC taught me a lot about organization, time management, and how to properly take care of myself. Learning these important lessons enabled me to reach a higher level in swimming.”

Martha was the only female swimmer in Canada to pre-qualify for the London Olympics. At the games, Martha finished fifth in the 200-metre breaststroke — a dramatic race in which a world record was set — and she captured the hearts of millions of Canadians and proved that UBC Olympians can compete with the world’s best.

Martha will take a short break from school to catch up with family then will return to UBC to continue her training with coach Joszef Nagy. Her plans for the future include doing postgraduate studies in the health sciences.

For students considering coming to UBC, Martha has this advice: “Come! It’s an amazing school that offers great education, professors, and extra-curricular activities. Not only is the athletic program great but it has multiple recreational groups that are some of the best in the country. UBC has a lot to offer and everything is done at an exceptional level.”