A Garden in exile 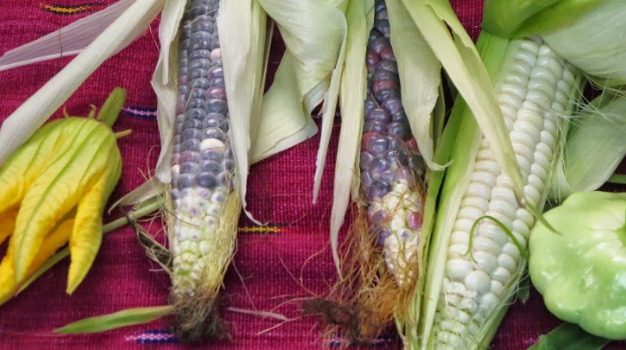 On a plot of land at the UBC Farm, Mayan culture is flourishing.

For the past 13 years, the Maya in Exile Garden has been at UBC Farm, managed by a group of Mayan families who fled Guatemala in the 1980s due to a military operation that targeted the country’s indigenous communities.

Most Mayan families who escaped the scorched earth campaign fled to Mexico, but a small number relocated to B.C., bringing with them the traditional ways of the Maya.

UBC Farm became the host of the garden after a UBC student involved in a Maya support group urged them to apply for a plot of land. The garden, slightly larger than an Olympic-sized hockey rink at 1,883 square metres, mainly grows the ”Three Sisters” – corn, beans and squash – staples of a Mayan diet.

Some UBC students volunteer at the garden. Others are involved through visits with the Department of Anthropology. Members of the public can take Maya cooking classes at the farm.

Lix Lopez, a member of the garden, came to Canada in 1979 to work for the World Council of Indigenous Peoples, and was here to welcome the first Mayan refugee families. Lopez answers questions about the Maya in Exile Garden and the role of farming in Mayan culture.

Why are the Three Sisters so important in Mayan cooking?

We can’t have a meal without them. Mayans are mostly vegetarian and bread doesn’t have the strength that corn does. Corn is our bread. The beans act as a source of protein, and squash cooked with brown sugar is dessert.

What makes the corn grown at the farm different than corn found sold in Canadian grocery stores?

The type of corn sold at grocery stores is genetically modified, specifically developed for the taste of the North American consumer. It’s sweet, but you cannot make tortillas with it.  White corn and pinto corn are grown in the garden and  are tougher to chew. This corn makes excellent flour for tortillas or tamales.

What’s an example of Mayan cooking?

Mayans eat tortillas or tamales all the time. One tamale is called xep (pronounced schep). This process to make them involves mixing unripe beans (still green) in corn dough, which is salted to taste and buttered to make it softer, and then wrapping them in corn or banana leaves, and steaming.

How do farming methods of the Maya differ from the West?

There’s a spiritual component. Before we plant, we have a ceremony to make an offering to ask for permission from Mother Earth to break the land. At the end of the harvest, we have another ceremony to thank Mother Earth for all the food that we have received.

Why is farming such a huge part of Mayan culture?

Mayans are often referred to as the “Children of the Corn.” It is who we are as people. Our culture evolved around the corn. It is challenging to farm here in Vancouver because the summer period is so short. But it really is a continued practice of a long Mayan tradition that has been around for thousands of years.

Members of the Maya in Exile Garden sell some of what they grow at the UBC Farm Public Market every Saturday. Proceeds go towards funding a project in Guatemala that develops girls’ weaving skills.