5 minutes with an IB student 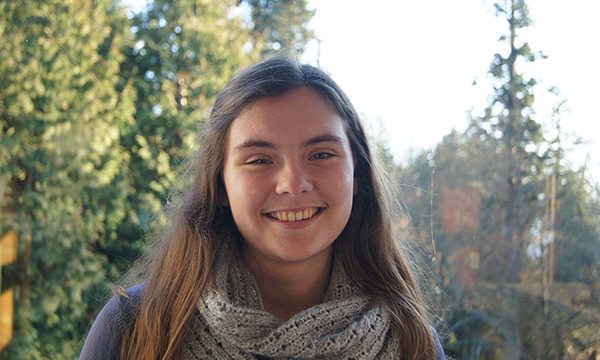 Global perspectives are key to education. This vision, shared by the International Baccalaureate and UBC, is why so many IB diploma and certificate holders find success here. We sat down with Fiona Jones, who received her IB diploma from Ardingly College in Haywards Heath, England, about her decision to study in Canada and come to UBC.

At what point in high school did you start considering studying abroad? Why did you choose not to stay in the UK for university?
I began considering studying outside of the UK as soon as I started to look at universities. I liked the idea of exploring somewhere new and when I looked at different education systems I was so excited to find programs that would allow electives and the option to do a minor, or even a double major. Outside of the UK there seemed to be so many types of degrees and different ways of tailoring your degree to your precise interests.

What made you decide to study in Canada?
I chose Canada for so many reasons but at the foremost would have to be the ability to have such an open and adaptable program for a lot less money that it would cost in the US!

What attracted you to UBC? Did you get a chance to visit before applying?
Initially I found out about UBC because of its world ranking and began exploring the website because of UBCs academic programs. I loved the courses that are offered and it just came with the added bonus of being in Vancouver with the amazing mountains, lakes and all that that entails. I did manage to visit and take a campus tour. The guides were international IB students, in their second and third years, and spoke to me for 30 minutes after our tour, giving me advice about choosing classes and residences. Even if you don’t have a chance to visit British Columbia, I would definitely recommend trying to attend the UBC sessions in London, which gave me a feel for the university.

Have you found that the IB program has prepared you well for university, and specifically, university abroad?
Yes, it definitely has. Since UBC has required courses it is great to have a more well-rounded background. I have to say that the citing and researching skills [that I learned at my IB school] have been really useful.

Have you met many other IB students at UBC? Where are they from?
There are a lot of other IB students from all over the world, including others from England. Among just my immediate friendship group there are IB students  from Saudi Arabia, Hong Kong, Canada and Germany.

Did you have any concerns or reservations about leaving the UK and coming to Canada?
I definitely was concerned. Canada is a long way away and far from most of my friends who stayed in the UK. I was worried about being able to balance academics and a new place whilst trying to make new friends.

How easy was it to arrive in a new school, in a new country where you knew nobody? Did you participate in any UBC programs for first years?
I participated in Jump Start, which is the two-week introductory program for international students. It was an amazing experience since you get a chance to explore the UBC campus and Vancouver and have a chance to make friends without worrying about classes. Also, you have a leader, who is an older student, so it is a great contact source for any questions throughout the year. Plus, when all the other students arrive you know your way around and have friends so it is less overwhelming. I would definitely recommend doing Jump Start if you get the chance!

Have you had a chance to explore Vancouver? What are some highlights of the city, some favourite places to go or activities to do outside of UBC?
I have had a chance to explore Vancouver. I just went to Stanley Park and the aquarium, both of which are stunning and such a nice day out. Grouse Mountain and Whistler ski resorts are both easily accessible by public transport so going to either of those to ski or snowshoe have to be a highlights as well. Even just jumping on the bus to get cinnamon buns and coffee with my friends just off campus is so much fun, and makes Vancouver feel like home.

What would you tell other IB students in the UK about studying in Canada and UBC to put their minds at ease about leaving home?
Studying in Canada is different from being in the UK but, fulfilling the stereotype, people are so lovely. Especially in the first few weeks everyone seemed to go out of their way to help me. In the first week I got on the wrong bus so I had to transfer to the train and a lady I asked for directions walked with me to the train and helped me work the automated machine to get a ticket! And it is the same story with people on campus. The IB makes the transfer academically as smooth as possible since there are a lot of other IB students and it sets you up well for university.

What other clubs or teams are you involved in at UBC?
I am part of a number of clubs including UBC debate society, which is just an amazing way to meet new people, and the Red Cross Society, which has given me the opportunity to organize events across campus. I am also on the lacrosse team, which began for girls last year so even though I had barely played before, that was fine and it is so much fun to get out there and give it a go. UBC is very proactive in the field of environmental awareness and sustainability so there are numerous clubs that promote that around campus, like the Green Team, which I am part of.

Have there been any surprises about living in Vancouver?
This is going to sound strange, but I was so surprised that people say “thank you” to the bus drivers from the back doors. I like it though and now find myself saying it. At home over the break I almost said “thank you” to the bus driver from the back before realizing that that would be pretty weird. Little cultural things.

Would you recommend UBC as a place to come to study?
Yes! There are so many class options with fascinating and engaging professors. My history prof this year has been hilarious and incredibly  knowledgeable, he interjects his travel stories into almost every lecture and they never fail to entertain or stun. But I still think the biggest attraction has to be the people. I have an amazing group of friends who are from every corner of the globe, with such different experiences and to top it all off we get to live in this beautiful province!