TEDx Terry Talk about working with the deaf in Uganda. 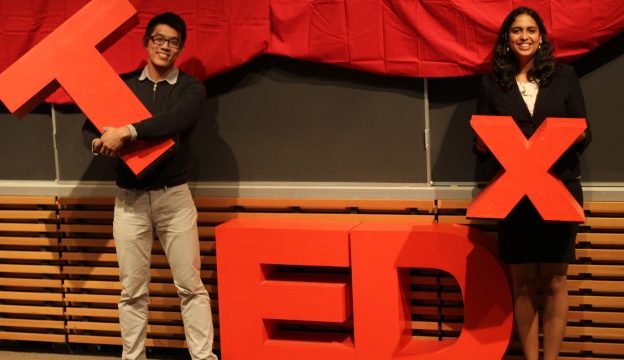 Not many things can entice a crowd of four hundred out of bed on a rainy Saturday morning, but UBC’s annual TEDx Terry Talks is one of them. I was particularly excited to hear fellow scholars’ Nidhi and Koon Peng’s presentation on Collaboration for Social Change. Their talk was based on their experience working with the Good Samaritan School for the Deaf during their International Service Learning placement in Kitengesa, Uganda.

Working with the deaf in a Ugandan village

Two years ago, Nidhi and Koon Peng had been placed in a literacy program at the Kitengesa Community Library. During their tour of the village, they came across The Good Samaritan School for the Deaf. From that first encounter, their curiosity took over and they began to immerse themselves in Ugandan Sign Language at the school. They even stopped talking to each other to practice their signing. Apart from enjoying learning sign and building relationships with the excited students, they were motivated by the need to advocate for the deaf students.

There are two words that still stay with me now from their presentation. The first is “kasiru,” a Luganda word meaning “stupid.” It was shocking to hear that this word is not only an adjective, it is a name and identity given to the deaf. A father would forget his daughter’s given name because he was so used to calling her Kasiru. Not only are they faced with the challenge of not being able to communicate with others, they were seen outcasts in their families and society. They struggle to belong, to find their identity as individuals and to access primary education that is catered to the hearing. Despite the gloom that surrounds this reality, it was inspiring to hear the stories of Mrs. Nsamba (the founder of the school) and others who are collaboratively working to dispel the myths surrounding deafness, and provide opportunities for the hearing and deaf communities to interact in meaningful ways.

Legacy of a colonial past

The second word is “muzungu,” the Luganda word for “foreigner.” A legacy of Uganda’s colonial past, this was often used to describe Nidhi and Koon Peng as privileged outsiders. I am slightly haunted by the stories Nidhi told me after their presentation — that when a child asks how to make a bicycle, the answer is, “you can’t, the muzungus make it.” I could sense the discomfort at how being “foreign” was attached to a sense of power and privilege that the locals subscribed to — which is far from the collaborative nature that Nidhi and Koon Peng believed characterized their work with the community.

The realities they shared remind me not to take these things for granted: for the privilege of being able to access higher education, for being able to communicate, and for the identity I have in my name. I could tell from the passion they spoke with that these two summers spent in a land not their own has really instilled a thirst in them to explore international development, and has changed the way they see their own careers.