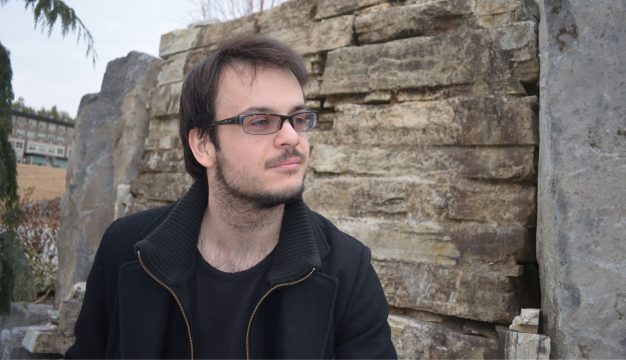 UBC Aboriginal Programs & Services is fortunate to have English tutor David Carlton in their Peer Support Network. The Métis student was not only one of the best Aboriginal tutors available, he was also one of the top English students on UBC’s Okanagan campus.

For the past two years, David has been an English tutor for Aboriginal Access Studies (AAS) students in both Writing 009 class and English 114 — University Writing from an Aboriginal perspective. The fourth-year English literature major just graduated to become the first individual on the Aboriginal side of his family to obtain a university degree.

“He’s awesome. David gives extremely good advice and truly enjoys what he does,” said AAS student Tyler Legare about his English tutor. “There’s so much passion behind what he teaches you. For example, I had one really difficult essay to write. I ended up with an A-minus. A grade I would not have got without his help.”

Legare’s comments come as no surprise to UBC Aboriginal Programs & Services staff, who field a lot of positive feedback about their English tutor. “David was able to relate both culturally and academically to the Writing 009 class of Aboriginal Access Studies students. He was able to combine his mentorship and tutor skills when relating to students both in and out of the classroom,” said Writing 009 instructor Jeannine Kuemmerle.

As a highlight of his undergraduate experience, David was shortlisted by UBC as a potential candidate for the Rhodes Scholarship to Oxford University. “As far as I am aware, I was the first student from UBC Okanagan campus to ever get shortlisted, and I was absolutely ecstatic. As a medievalist and Anglo-Saxon scholar, I understood the historical importance of Oxford, and was eager to get my application under way.”

Although David did not receive one of the scholarships, he is grateful for being recognized. “Very few people are able to experience the Rhodes process, and if you are invited to do so, you don’t want to miss the opportunity. It truly is something that only happens once in a lifetime.”

David is also community minded and involved with the local Métis community. “I learned about my Métis heritage during my first few years of high school but didn’t really reconnect with my Aboriginal roots until after my first year in university,” he recalls.

After participating in a Métis Nation of British Columbia youth event, David embraced his culture and subsequently became a youth representative for Métis Youth of British Columbia. He then oversaw the Michif-language preservation project where he was able to put his linguistic training to use.

David’s graduate studies are in the area of Anglo-Saxon language literature and his long term goal is to pursue a doctorate in Anglo-Saxon law. “I’m super excited to think about what the future holds. I can’t wait to get there.”