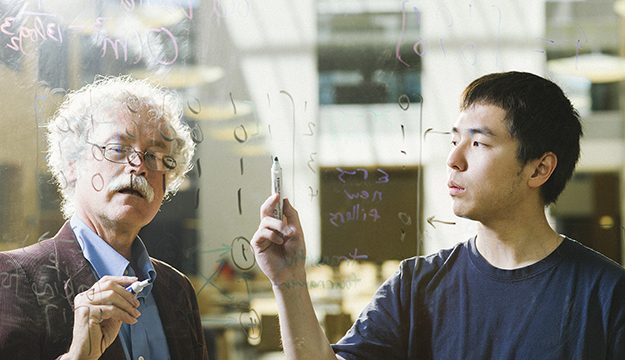 Recent grad Ronnie Chen demonstrates that UBC is a place where young academics get the support they need to flourish. Graduating with a combined honours in Computer Science and Mathematics, Ronnie wrote his honours thesis on computer programming language theory and was on the UBC team who scored in the top ten for three years in the William Lowell Putnam Mathematical Competition — the main Mathematics problem-solving competition in North America.

According to his academic advisor, Professor Richard Anstee, Ronnie’s paper on forbidden submatrices proves conjectures of some well-known mathematicians and is “full-fledged research, not just a student paper.”

“A matrix,” Ronnie explains of his work, “is an abstract data structure, kind of like a simplified representation of a road network or a friendship network (e.g., on Facebook). We were interested in proving that such structures are very limited if they have to avoid certain small-scale features. For example, that’s kind of like saying that a social network must be very limited if no four people in it are mutual friends.”

Ronnie recommends UBC to prospective students citing UBC’s “large and extremely supportive community of diverse learners” as a draw. For fun, Ronnie reads and listens to music, and if you ask what makes him smile, he’ll tell you, “Walking down Main Mall and looking up at the brilliant cloud patterns on a nice day.”